Stephen Colbert tears into NASA for its female spacesuit debacle 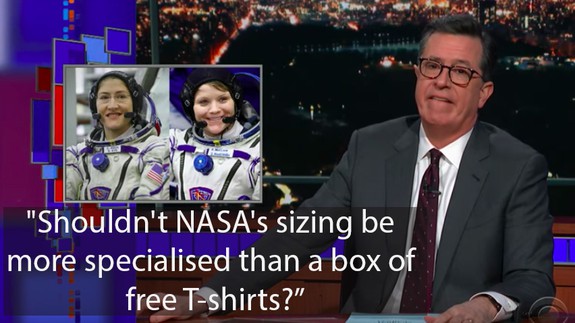 In case you needed any evidence that we’re still living in a world that’s built for men, you need look no further than this week’s news that an historic all-female spacewalk has been cancelled due to a lack of availability of appropriately sized space suits.

Astronauts Christina Koch and Anne McClain were supposed to be space-bound, but NASA only had one suit available in the size that both women required.

Stephen Colbert tore into NASA in his “Meanwhile” segment.

“So, apparently we pick our female astronauts the same way we pick our Rockettes,” Colbert joked. “‘Look toots, you wanna walk in space, you gotta fit in the costume, what do you want?'”  Read more…